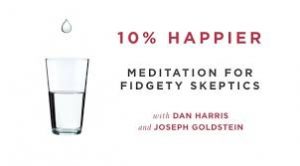 I have had this book in my Audible wish list for several months, since I saw the Dan Harris’ interview on the documentary “The Minimalist” on Netflix.  Whenever I become aware of a book that seems interesting, I look it up and put it into my Audible Wish list immediately.  During this interview tying meditation into minimalism, Dan’s Book intrigued me because I recognized him from his role on ABC network News.

I was getting ready for a long drive from Orlando to Jacksonville and was strolling though my wish list looking for something to get me through the 3 hour drive.  Since it had been several months since I added the book to my audible list, I only vaguely remembered what the book was about.  I played the audio sample for a quick reminder, and was pretty turned off by the word, meditation at first.  His story about melting down with a panic attack as a network anchor had me hooked so I hit, Buy Now with 1 Credit.

In the Preface Dan goes into meditation and mindfulness which was making me tune out and close to switching to another book for the boring ride.  I have almost switched on books in the past because something in the Preface or beginning chapters turned me off, like the liberal rant in the beginning of “The Frugalwoods”.   I remembered sticking it out in “The Frugalwoods” and glad I did because of the excellent storytelling.  So, I kept listening to 10%, hoping to get to a story that would make the drive fly by.

Over the next couple of hours I was captivated by Dan’s story about his medioric rise in the world of Television news.  He is an excellent story teller, which makes sense since he has spent his life telling stories for millions of television viewers.  I am an avid reader or listener to concise condensed self help advice from real people who have experienced whatever they are trying to teach.  Sometimes this advice comes across very dry and boring like you are listening to Ferris Bueler’s teacher.  This is not the case with 10% happier, after getting hooked on Dan’s Story, I didnt care if i learned any “life lessons”, I just wanted to hear more.

I can always tell if I am into an audio book, when I get to my destination I continue to sit in my car listening, finding it hard to tear myself away to do whatever it is I am supposed to be doing .  I sat there as long as I could until I was actually late for my appointment.